Make sure you try our top 10 classic Italian treats on your next holiday to Rome. Learn what to look for in a perfect carbonara and where to find the best gelaterias.

Soak up the sun, culture and carbonara with our top 10 plates you need to try on your next Italian getaway. If you’re visiting Rome for your next city break, these traditional dishes are an essential part of your stay so make sure you take your tastebuds on a tour of the very best pasta, pastries and porchetta on offer.

Travellers are advised to read the FCO travel advice at gov.uk/foreign-travel-advice for the country they are travelling to.

10 must-try foods to eat in Rome

immered beef dishes were once incredibly common in Rome when butchers developed slow-cooked recipes to tenderize tough cuts of beef. Today, meat is much more affordable than it used to be, so some of those traditional dishes have fallen out of fashion.

At Mordi E Vai in the Testaccio Market, however, allesso di bollito – simmered beef – is very much alive. The stall serves the tender meat on bread dipped in the meat’s savoury juices and the sandwich is one of the most delicious revived classics the city has to offer.

This flavourful thistle has become somewhat of an ambassador for Roman food and carciofi alla giudia (Jewish style fried artichokes) appear on every gastronomic traveler’s hit list. Due to the demand from both tourists and locals, you can find artichokes sold in markets and served in restaurants all year-round.

But for a taste of the carciofo romanesco (the celebrated local globe artichoke) visit Rome in the colder months when it’s in season. Aside from the famous fried preparation which is popular in the Ghetto, Rome’s historic Jewish quarter, you’ll find carciofi alla romana (artichokes simmered with oil and herbs) on just about every menu.

The clue’s in the name for one of the city’s most iconic pasta dishes, cacio e pepe: “cacio” is the local word for Pecorino Romano, a salty, aged sheep’s milk cheese, while “pepe” means black pepper.

The two ingredients are combined with cooked pasta and a bit of its cooking water, then stirred vigorously to create a smooth sauce. You’ll find a brilliant version at Salumeria Roscioli, whereas Cesare al Casaletto is known for its loose and more liquid variation on the classic dish.

Many dishes in Rome inspire passionate debate and carbonara is the focus of the most spirited ones. Every cook and eater has very strong opinions about the dish’s origins and ingredients and is totally inflexible when confronted with variations. There’s one thing all Italians agree on however: carbonara should never have cream added to it.

Generally speaking, the dish is made with spaghetti or rigatoni, guanciale or pancetta, egg yolk or a whole egg, Pecorino Romano or a combination of Pecorino Romano and Parmigiano-Reggiano, and black pepper. The eggs are gently heated to create a thickened sauce, which should cling to the pasta for a silky and non-scrambled effect.

Rome is home to thousands of gelateria selling scoops of classic flavours and whimsical originals. With such a glut, virtually every Roman has access to gelato en route to work or home, so it should come as no surprise that many locals enjoy this frozen treat on a regular basis.

While there’s certainly plenty of tempting gelato around, not all shops are created equal and relatively few use all-natural ingredients—for proof just peek at the ingredients list posted in most shops and you’ll be shocked at how many vegetal oils, artificial colors, and other junk appear—so stick to places like Otaleg, Fatamorgana, and Fior di Luna.

These days, Rome’s go-to breakfast pastry is the cornetto, an industrially produced, margarine-based faux croissant. But in the past, maritozzi ruled. These sweet, leavened buns are sliced open and filed with barely sweetened whipped cream.

At Regoli, a historic bakery near Piazza Vittorio, maritozzi are heaped with whipped cream and displayed at the entrance. There’s no glamourous way to eat these cream-filled treats, so consider yourself warned.

Pizza has a fairly broad meaning in Rome and the word is applied to a range of flatbreads and round personal pizzas. Pizza al taglio (pizza by the slice) is a distinctly Roman style of pizza and features either adorned dough cooked in sheet pans or worked into an oblong shape, then baked.

In all cases, the pizza is served by the slice and is cut with a knife or scissors into the diners’ desired portion. Depending on the joint, the pizza may be served folded or on a tray, but it’s always served in a casual way with no frills and no table service.

Porchetta is a deboned, slow-roasted pig. The precise cuts may vary but often include belly and loin seasoned with salt, pepper, and herbs. Although porchetta is pretty ubiquitous and appears at takeaway joints and delis as a sandwich filling, a truly exceptional specimen can be elusive.

For a truly delicious, moist, and perfectly seasoned porchetta experience, visit Panificio Bonci near the Vatican and order slices of pork sandwiched between crispy pieces of pizza bianca, the simple local flatbread.

Supplì are rice croquettes served at Rome’s takeaway joints and pizzerias. The classic version features bits of ground beef or sausage or chicken gizzards (or all of the above!) cooked with tomato sauce and rice until the mixture is thick and creamy. The rice is then set aside to cool, formed into egg-shaped parcels around a piece of mozzarella, breaded, and deep-fried. The resulting supplì should reveal melted mozzarella when broken into.

The classic tomato and meat sauce recipe dates back to at least the early 20th century but today creative cooks have begun flavoring the rice with new condiments like Pecorino and black pepper or radicchio and gorgonzola—visit Supplizio, Pizzarium, and Trapizzino for both the classic and updated versions. 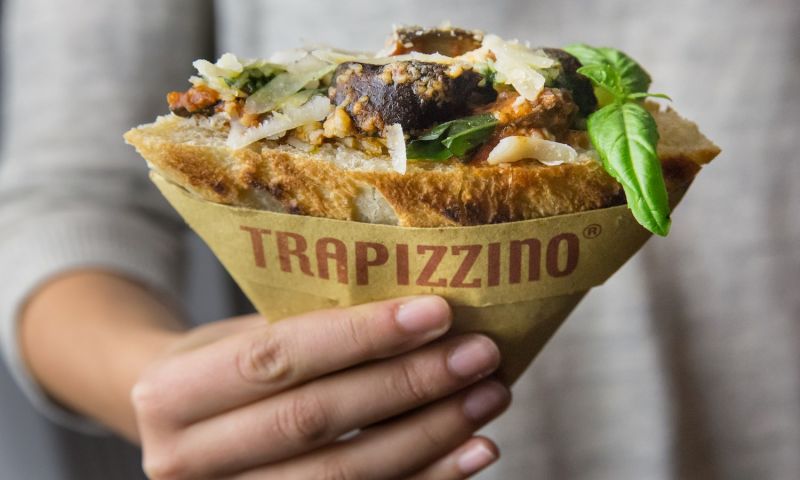 The trapizzino was invented in 2009 by Rome’s beloved experimental pizza maker Stefano Callegari. This creative baker made thick, triangular wedges of pizza, sliced them open, and filled them with Roman classics like meatballs, tongue with green sauce, and chicken cacciatore.

The clever street food, which married Rome’s love of pizza with its love of savory dishes, gained a massive following and there are now seven Trapizzino shops across town, with others in Milan, Florence, and NYC.